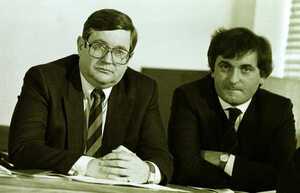 They gave their lives to it.

The response confirmed that 109 ex-ministers are in receipt of pensions, amounting to an €8.8 million payroll every year at taxpayers’ expense.

Sinn Féin finance spokesperson Pearse Doherty said:“The fact that this level of payments is being paid to former ministers when we are facing into one of the harshest budgets in history is a scandal. Many of the people on this list are the architects of our economic downfall and of the hardships being faced by hundreds of thousands of Irish people today.”