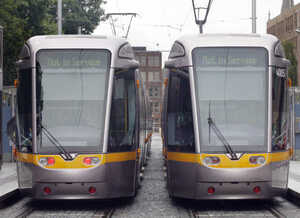 At an estimated cost of up to €170 million, the Luas link-up is planned to run from St Stephen’s Green by Trinity College and up O’Connell Street before doubling back down Marlborough Street and across a new Liffey bridge.

It will connect the Green Line, which terminates at St Stephen’s Green, to the Red Line, which runs along Abbey Street, and also form part of a new line connecting Luas services with a suburban rail station at Broombridge near Cabra.