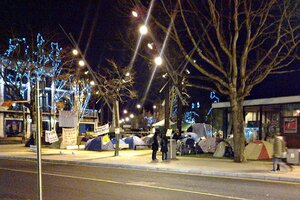 In relation to threat of fines and court action against Occupy CORK….While the threat of possible fines and court action does not particularly scare me, though I am hardly happy either, I do however find it a little bit insulting.
I will leave the rhetoric for another day but consider this, what about the bankers, market speculators, politicians, CEOs’ and others who got our country into such a economical mess as well as creating or enhancing other social issues. Where is the threat to them of fines and court action? Instead some still receive huge pensions and some
have been given jobs in state agencies such as NAMA.
To me it seems we should be focused on the real people at fault forthe problems in our countries. Threatening people who oppose the injustices with fines and court action is only likely to infuriate those, whether involved with Occupy Cork or not, who feel there is something unfair and unjust about what has happened to this country.

Brian Houlihan (One of those participating in Occupy Cork)