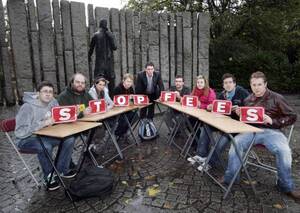 Gary Redmond, president of the Union of Students in Ireland and the USI massive this afternoon at Stephen’s Green to ‘Fight The Fees’.

Labour and Fine Gael TDs (including Education Minister Ruairi Quinn) pledged that they would not introduce tuition fees in the run up to the last General Election. A promise they are poised to break. The Union is planning a protest march next Wednesday (November 16) from Parnell Square to Merrion Square.