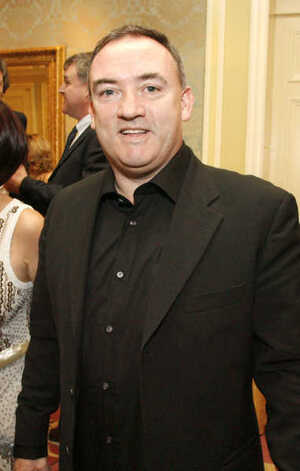 Talent agent Noel Kelly (centre). known as the ‘Godfather’, who represents all the people in the photo above (plus Pat Kenny, Joe Duffy, Colm Hayes, Brendan O’Connor, Derek Mooney, Claire Byrne, John Kelly, Maura Derrane, Baz Ashmawy among other RTE stars) claimed this morning that his roster of clients are in financial difficulties because of pay cuts at Montrose.

“Some of the talent on my books have taken a number of pay cuts since 2008. There is no doubt about it, they are stepping up to the plate time and time again.”

And he revealed the financial pressures that some of Ireland’s household names were now facing: “Some of the talent can’t afford to pay their bills or bloody mortgages with what they earn and with work not being renewed. If a show is cancelled what can you do? You can’t exactly force them [the RTE bosses] to keep it on.

“We have people struggling like everyone else, trying to get an interest-only mortgage and not being able to get one, having to sell their cars. This idea of them living in this ivory tower on huge wages is simply not true.

“When you look at a footballer’s career, they only get a certain amount of time and there’s no certainty in it, and it’s the same in the media.”