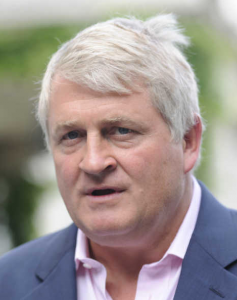 Denis O’Brien, in an opinion piece in today’s Irish Times, rounds on his critics most notably Eamon Dunphy and Independent News and Media (IN&M). He attacks the coverage of the findings of the Moriarty Tribunal, and claims he is the victim of a campaign by journalists and broadcasters (working in organisations not under his direct control) who, he claims, are driven by a “disturbing trend of cynicism and nastiness”. He also has a dig at the Sunday Independent’s telephone polls.

If one looks at the coverage relating to me over the past month in IN&M titles, The Irish Times, RTÉ and other media there is a disturbing trend of nastiness and cynicism.

Because Today FM decided to drop a presenter of a programme that had been running for 14 years and had falling audience numbers, suddenly there is an eagerness to depict me as a pariah among journalists, columnists and broadcasters.

The logical consequence of this view is that Communicorp [O’Brien’s media group] or any other radio organisation public or private would not be able to change any of its presenters without the accusation of editorial interference by management or an owner.

Eamon Dunphy has accused me of “despising journalism” (Newstalk, October 20th, 2011). It is as untrue as it is unwarranted. I have great respect for the many professionals in the Irish media industry.

Eamon Dunphy’s claim about leaving Newstalk in solidarity with a fellow broadcaster is hollow – given the facts. Dunphy left because of money.

“I’m with the old-style mogul,” Eamon Dunphy declared in a lengthy article for this newspaper [Irish Times] on April 12th, 2008, in relation to the shareholdings in Independent News & Media of both Tony O’Reilly and myself.

Dunphy penned his heavily opinionated piece as “a journalist and a citizen”. He was unashamedly pro-O’Reilly, which is all very fine, but was it an objective, unbiased article? It certainly was not, particularly given a revelation in the Sunday Times (May 9th, 2010). When Dunphy was probed about the Irish Times O’Reilly v O’Brien article his interviewer, journalist Michael Ross, elicited the unvarnished truth: “What he [Dunphy] neglected to mention, either to The Irish Times or in the piece, was that he had written it at the request of Tony O’Reilly.” When this was put to him Dunphy revealed: “It was a favour to [Tony] O’Reilly, who asked me to write it.”

Dunphy explained that he did not mention this at the time because he “did not think it was relevant to the commentary”. Vintage Dunphy . . . only disclose what fits your agenda. When it comes to Dunphy’s diatribes and vitriol I find myself in good company – Seamus Heaney, Dick Spring, Pat Kenny, Proinsias De Rossa, John Hume, et al.

If I had the editorial control as alleged I would not have allowed his final programme to be aired. I doubt RTÉ or any other print media company would have taken that risk. After his first stint at Newstalk in 2006 he described me as “bitter . . . small-minded” ( The Irish Times, April 12th, 2008). He was subsequently re-hired in 2008. So much for my supposed editorial interference.

In recent weeks I have been reminded by a number of journalists of the unprecedented decision taken by theIrish Independent to publish a front-page editorial entitled “Pay Back Time” urging readers to vote out the rainbow coalition and put Fianna Fáil back in power on the eve of the 1997 general election.

Some will also remember then-government adviser Seán Donlon subsequently revealing at the Moriarty tribunal how at a meeting in 1996 Tony O’Reilly let the then-taoiseach John Bruton know how unhappy he was with the way his “interests” (Moriarty tribunal) were being treated by the government. Mr Donlon added that he was left in no doubt about the potential hostility of Independent Newspapers if outstanding matters were not resolved.

No one has accused Communicorp or any of its stations of trying to influence voters in any election. It was down the middle all the way.

Articles about me – especially in IN&M titles – invariably include references to the Moriarty tribunal where I spent 10 years giving evidence and opening up all my files and bank accounts. My views of the Moriarty tribunal are best captured by Supreme Court judge Adrian Hardiman (court report, The Irish Times , July 15th, 2011).

He has described the powers of “modern tribunals of inquiry as “truly awesome”, their expense “truly enormous”, the cost of participating in them “grotesque” and their duration as “nothing less than appalling”.

He said tribunals are “legally sterile . . . devoid of legal consequences” and cannot be used in legal proceedings as either a weapon or a shield. I have repeatedly refuted all the findings in detail. All I want to say here is that the findings were based on opinions, not on evidence, much of which was, in my opinion, airbrushed out.

I have been the largest shareholder in IN&M for the past four years. My “punishment” – apart from the economic cost – has been a prolonged, nasty, well-orchestrated campaign against me across a range of issues. Articles are regularly published without me being given an opportunity to respond. But then the normal demarcation between board and management, on the one hand, and editorial on the other, does not exist.

The hostile reaction to my shareholding in IN&M has been seamlessly executed through the editorial pages of all their publications. The editorial pages reflect the views of senior management faultlessly. The Sunday Independent has a unique position on the Irish media landscape for all the wrong reasons. Its phone polls of questionable provenance, absence of objectivity, and its unwarranted attacks on individuals will provide the next generation of media studies students with the raw material for a fascinating thesis.

Depiction Of Me As Enemy Of Journalism Undeserved (Denis O’Brien, irish Times)