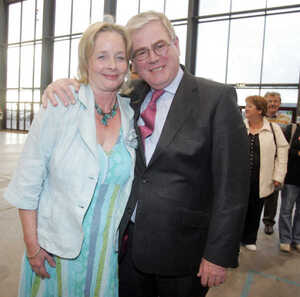 Labour MEP Nessa Childers (above with Eamon Gilmore) has said she has been threatened with expulsion from the party because of her strong opposition to Kevin Cardiff’s proposed appointment to the European Court of Auditors.
Mr Cardiff hit the headlines at the beginning of the month, when it emerged Department of Finance officials had miscalculated €3.6bn from the national debt last year.
Speaking in Strasbourg today, Ms Childers said she was told to tow the line and support Cardiff’s appointment or face expulsion.
She said she was shocked at the threats she has been subjected to.