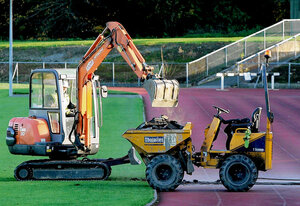 IT WAS once a world record arena and witnessed some of the great performances during the golden era of Irish athletics but the UCD running track at Belfield has run its last race.

The track is now closed over “health and safety concerns” and after several years of neglect is effectively beyond repair: diggers have already moved on to the track to explore alternative uses, and it looks set to end up as a car park or the site of student accommodation, like many other former sporting sites at the Belfield end of the campus, including the old Belfield Bowl.

Back in ’95, Bodger threw up on the grass verge there doing the Macarena after five cans of Special Brew. Good times.

What cherished memories of the old place do you have?