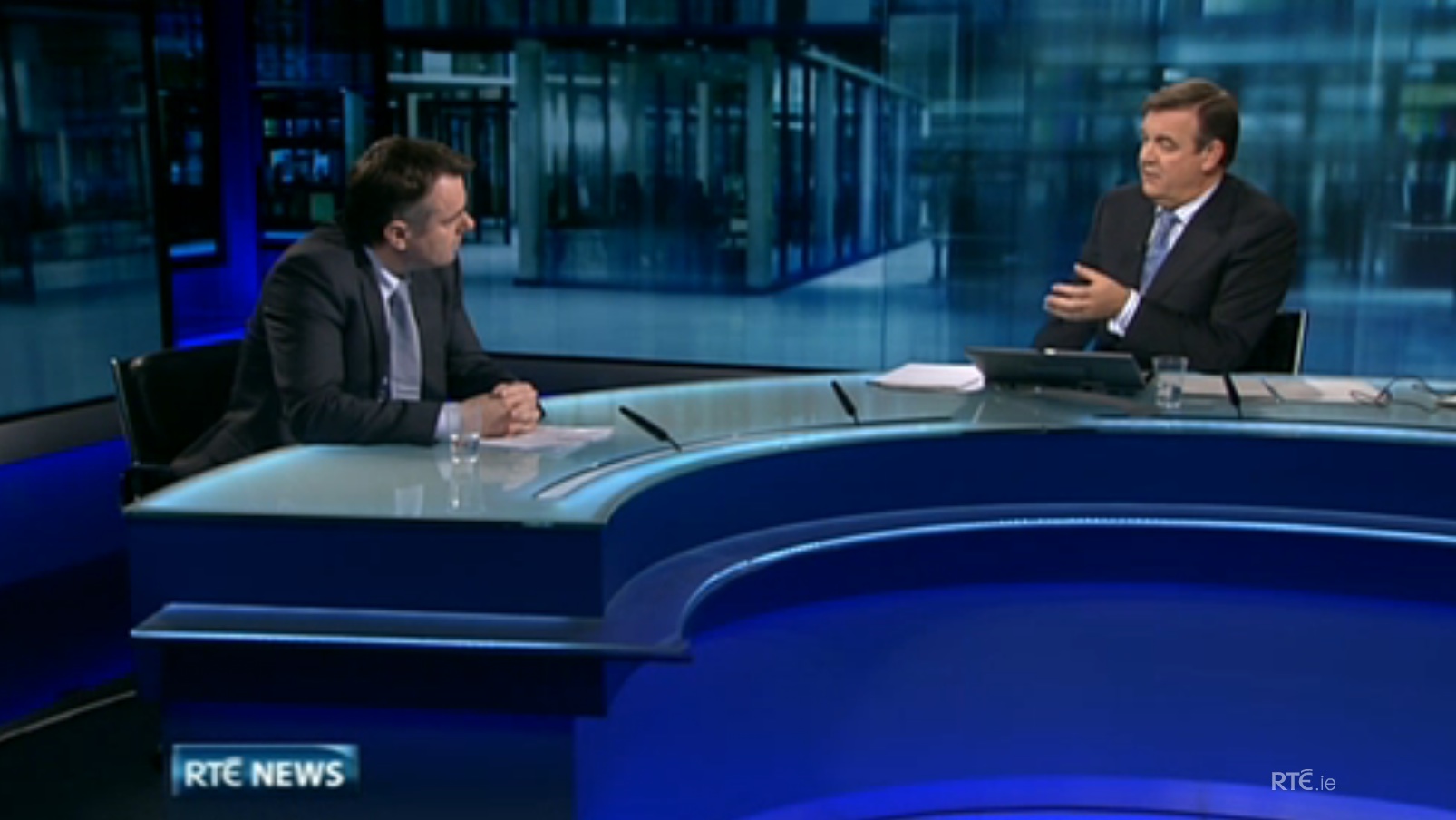 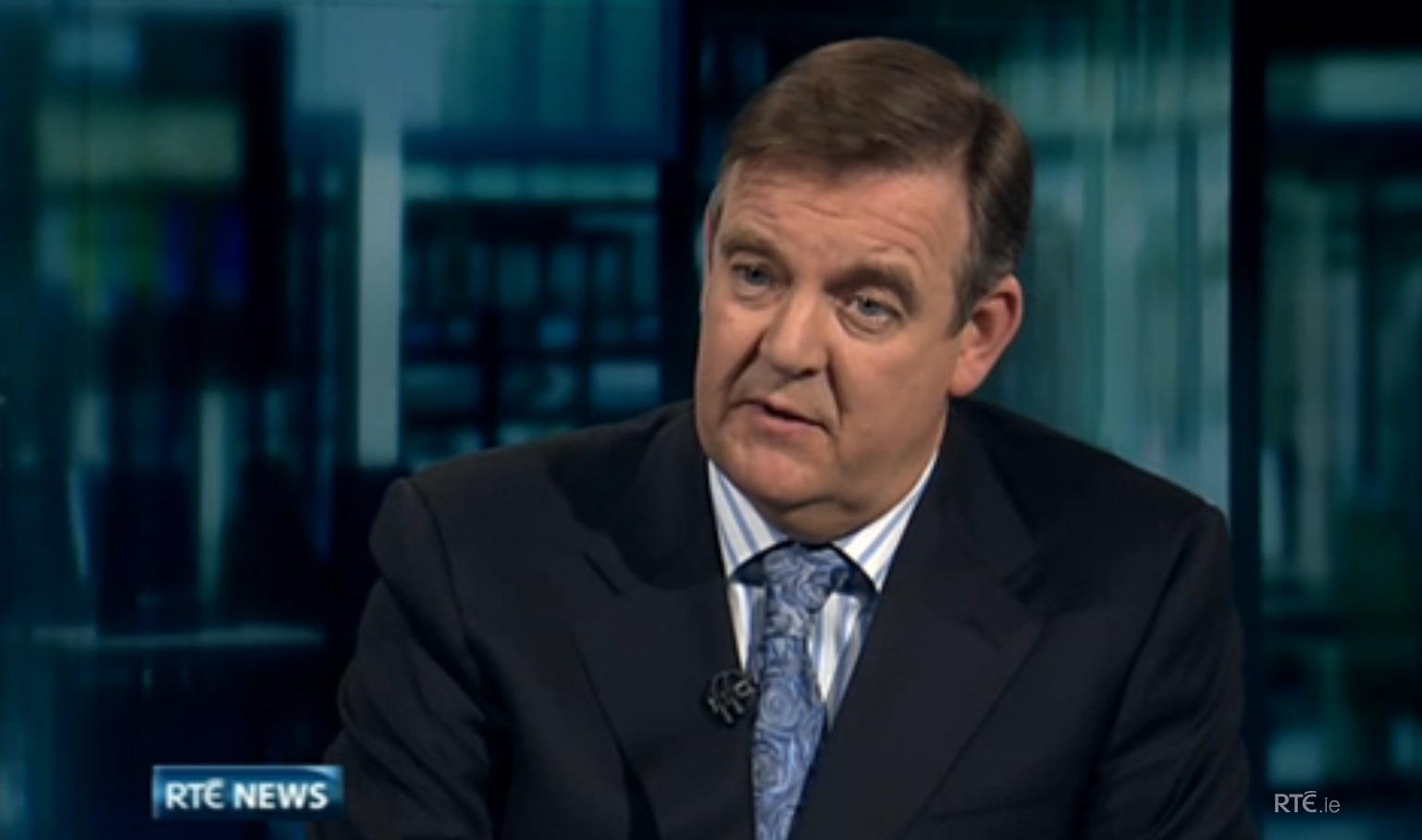 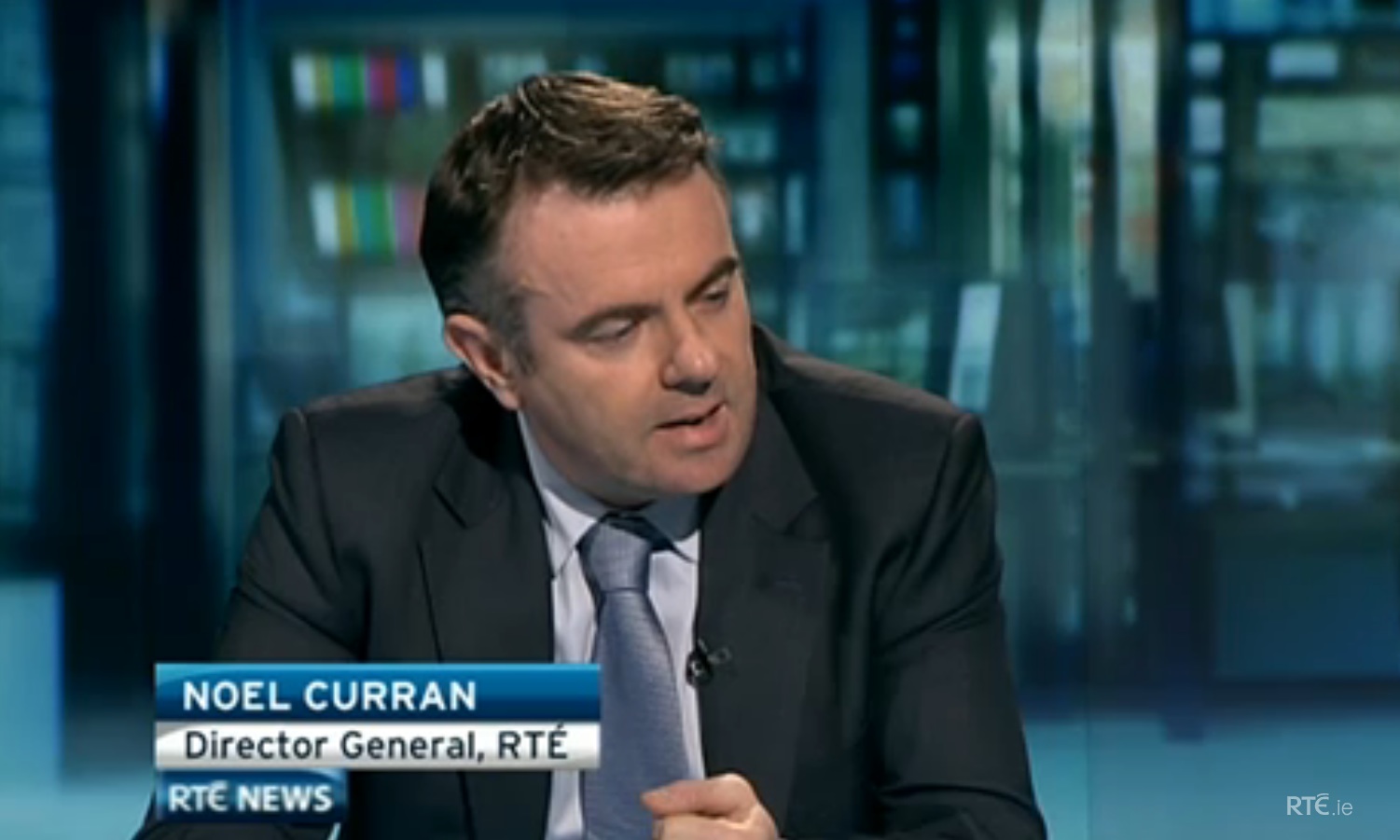 Imagine you got a chance to grill your boss (should you be in regular employment) on national television? Bryan Dobson took the opportunity with both of his manly hands last night on RTE’s Six One news when RTE DG Noel Curran dropped by to discuss the fallout from the libelling, on Prime Time Investigates, of Father Kevin Reynolds.

Bryan Dobson: “Noel Curran, would you accept that this announcement by the government today indicates  very clearly that they regard your own, RTE’s own, response to this, the inquiry, as already been announced by RTE as simply inadequate? What are you going to do to get to the bottom of this?”

Noel Curran: “Well I think that the first thing to be said here is that anything that restores the trust in Irish journalism and RTE’s Current Affairs output in particular, em, is, is a positive step. Anything that can help do that. The government are perfectly within their rights in the legislation to do this.  When we saw it in the legislation we knew this would be invoked on some issue. We’ve a good working relationship with the BAI [Broadcasting Authority of ireland] and we will absolutely cooperate fully, this is a huge…”

Dobson: “Did you know this was coming? Did you have any forewarning?”

Curran: “No no, we didn’t know it was coming. But, basically this is, you know, one of the gravest editorial mistakes that has ever happened in RTE and we have an incredible track record in current affairs and in Prime Time Investigates in particular. And I think if this, coupled with our own efforts, helps us restore confidence from the public in our output then that has to be welcomed.”

Dobson: “There is a question in relation to those who are involved in the programme, maybe even yourself, while this inquiry is going on, whether it’s appropriate that you and those under you remain in place while this investigation, which may or may not come out with adverse findings, at the conclusion.”

Curran: “Well, I think in terms of that. We intend you carry on with our own inquiries. We have an external independent inquiry looking at at our current affairs editorial processes and I think that is very important that we, that we get a view from an independent expert as to whether this was a systemic failure in our processes…”

Dobson: “But the question I am asking you is should you and others involved in the programme remain on the job as it were while this investigation is underway? We saw that Father Reynolds had to stand aside when allegations were made against him.”

Curran: “I think in, in in terms of myself I, I wasn’t directly involved in the decisions that led up to the broadcast of the programme.”

Dobson: “But you’re Director and Chief in RTE.”

Curran:  “Absolutely and I absolutely take absolute responsibility in that regard. In, in terms of the others, we will now engage with the BAI, we will see what the scope of their inquiry is and we will determine what to do then.”

Dobson: “But the facts are that a very serious error was made, gross defamation of this man as RTE itself has said, is to be investigated now by a statutory body, the Broadcasting Authority, but the people who were responsible here in RTE remain in position.”

Curran: “Well I think in terms of the approach that we have tried to take with this, you have to go through due process Brian. Our approach to this has been, we, when we realised the mistake we issued a lengthy apology, the biggest apology in RTE history, eh, I apologised personally, we settled the case with Father Reynolds and, and we instigated the first external review of our procedures that we’ve ever done. And we also said that we would publish those findings…”

Dobson: “What about some of the aspects of the way on this was handled. In the first place, the fact that the offer of a paternity test, before the programme went out, wasn’t taken up by RTE?”

Curran: “There were absolutely serious mistakes in, in the production and decisions around this programme. I have reviewed all of the material, we have had a number of internal reviews, one of those is still ongoing, we have an external review. When, when..

Dobson (interrupting): “So when you tell the public, on this issue, why this offer of a paternity test was rejected…”

Dobson: “Is it RTE policy that reporters reply to solicitors’ letters?”

Curran: “That is not usually RTE policy and, and that is obviously one of the issues that we are looking at in regard to this. Also, procedures around doorstepping, other issues like that are also being looked at.”

Dobson: “Was the doorstep of Fr. Reynolds at a First Holy Communion Mass something that would have to be approved by you?”

Curran: “No, no a doorstep wouldn’t have to be approved by me but can I say in relation to all of this that, that this issue is in being taken, is, is being taken, is a, is a really grave issue for this organisation. We realise that, we absolutely realise the impact this had on Father Reynolds. That is why we took the actions and…”

Dobson:  “But what the solicitor has said, Mr Curran, is the way in which RTE has handled the matter after the event compounded, if you like, the original gross defamation of him. That the delays and the obstruction of his case, actually I think the phrase used to describe it was ‘appalling behaviour’ by RTE.”

Curran:  “Absolutely. He also said that RTE had handled it well since the paternity test result came back, when we realised the mistake. These are all of the issues that we are looking at Brian, we will bring recommendations…”

Dobson: “Sorry to cut across you, for example the woman who made the allegation in early September admitted that she’d lied, that he wasn’t the father of the child, the paternity test was finally carried out, it wasn’t until the end of that month, a whole month went by where RTE refused still to acknowledge his letter…”

Curran: “I’m going to say that, I’m not going to defend any of that. What I’m going to say is that serious mistakes were made. We need, just, the inquiry that the government announced today will take two months. We need, we need another few weeks Brian to just complete all of our reviews, all of our processes, we will then bring forward recommendations to try and restore trust in our journalism and nothing will be ruled out in those recommendations.”

Dobson: “But these show errors in the aftermath of the original broadcast that took place on your watch?”

Curran: “Absolutely, and as Editor and Chief I treat this in the most grave way.”

Dobson: “And is it still RTE’s policy that heads that roll [a reference to RTE’s head of Corporate Communications, Kevin Dawson’s assertion that: “rolling heads do not learn lessons'”] don’t learn anything?

Curran: “I think in terms, in terms of where we go from here, at the Board Meeting, nothing will be ruled out. You have to balance, you have to balance accountability here with actually not killing off investigative journalism in this organisation. That is something that we are going to have to weigh up when we do decide to make decisions.”

Dobson: “I’m being told that the Prime Time Investigates Programme has been suspended for the moment. Is that the case?”

Curran: “We’ve decided to suspend the next series of Prime Time Investigates, the December series, until we’ve completed all of our reviews, until [Press Ombudsman] Professor [John] Horgan [who is carrying out an independent review of the case at the behest of RTE] has examined our processes, and we want to just ensure that nothing that he raises has been overlooked in the making of those programmes,  so the next series of Prime Time Investigates has been deferred.”

Dobson: “Noel Curran, Director General of RTE, thank you for talking to us.”