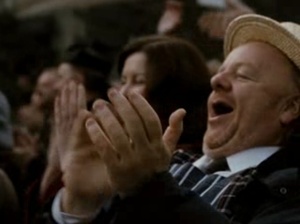 FOREIGN DIRECT investment companies are attracted to Ireland because the Irish are a happy people, Minister for the Arts, Heritage and the Gaeltacht Jimmy Deenihan has claimed.

Speaking at the launch of the Science Gallery’s programme for 2012 in Trinity College Dublin, Mr Deenihan said the disposition of the Irish people was an attractive part of the package offered to foreign direct investment along with the 12.5 per cent corporation tax.

“We are a happy people, and generally a sincere people. For some people, who are looking at foreign direct investment, that is a consideration,” he said.

Mr Deenihan said the Irish were a philosophical race and so many people took the attitude that things that happened were the “will of God”. “I have seen so many people say that over the years and that’s our disposition and it is a very good one to have,” he said.

(Screengrab of Irish Jam via BMD)

Won’t Somebody Please Think Of The Landlords?

Did You Know Alaa?