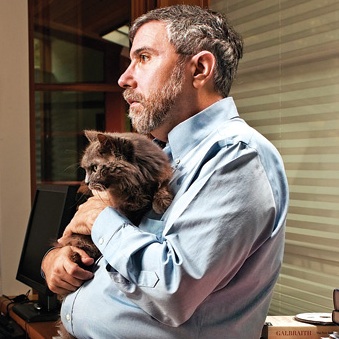 One of the reasons Ireland has been touted as a great success story for austerity is the fact that unit labor costs have fallen sharply, suggesting that Ireland is well along in the process of “internal devaluation”.

But there’s a puzzle here. If you look at Irish nominal wages, they have fallen only slightly: 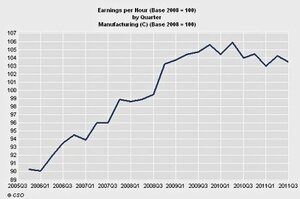 That still adds up to a significant fall in relative costs, because wages have risen elsewhere in the euro area. But it’s nothing like the big competitiveness gain we’ve been hearing about. That, it turns out, comes in large part from a surge in measured productivity, calculated, as best I can tell, by real value-added per worker.

And I had a suspicion here, which I shared with Kevin O’Rourke, who it turns out had the same suspicion — and who pointed me to work by the Irish central bank (see Box A in the first-quarter 2011 report) that lends support to this argument. It seems likely that a large part of the apparent gain in Irish competitiveness is a statistical illusion.

How so? Well, Ireland is an economy that generates a lot of GDP — but not much GNP — out of capital-intensive, foreign-owned export sectors, such as pharma. And what has happened in the austerity era is that these sectors, which aren’t selling to the domestic market, have held up much better than labor-intensive sectors serving that domestic market. And this causes a spurious increase in labor productivity: if you lay off a construction worker but don’t lay off a pharma worker who basically watches over very expensive machines that produce a lot of output, it looks as if productivity has gone up, but in any individual sector nothing has happened. 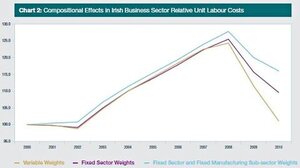 It’s a bit small, but the line at the bottom shows relative unit labor costs the way they’re often reported; the blue line at the top shows what happens when you correct for compositional effects.

I’d like to see an update, of course. But it looks as though much — not all — of the apparent success of Ireland in achieving internal devaluation may be a statistical illusion.