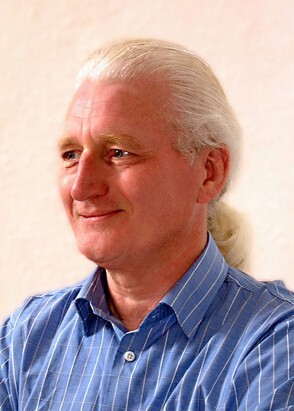 From Finola Meridith of The Belfast Telegraph last October:

John McCarthy has motor neurone disease — that relentless illness that used to be known as creeping paralysis. His muscles are wasting away and soon he won’t be able to speak anymore.

John knows he doesn’t have long left. That’s why it’s more important than ever to listen to what he has to say….He believes that we need to radically rethink how we see madness and mad people.

“Society has bought into this idea that the mad community is dangerous and to be feared, yet statistically we are the most peaceful members of society,” he says. John sees no shame at all in standing up and saying, “yes, I’m mad.” He believes that, while it was hateful and painful at the time, the madness that afflicted him — he attempted suicide and was locked up in a psychiatric unit for a year — ended up being “one of the most constructive learning experiences of my life. I learned how to receive love with confidence. I have learned how to be at peace with who I am”.

Beginning to talk openly about madness is no quick fix. But rather than seeing it as a socially shameful affliction, something to be hidden at all costs, why don’t we view madness as a natural response to the terrible things that happened in this country?

If we can do that, then we’re one step closer to getting better.

Mental illness Affects Many People, So Why Hide From it? (Finola Meridith, Belfast telegraph, October 5, 2011)