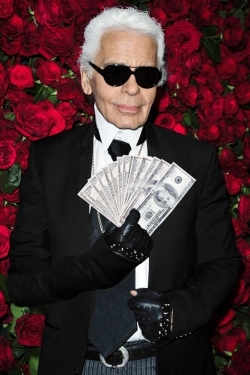 On the Greek economic crisis:

Nobody wants Greece to disappear, but they have really disgusting habits — Italy as well.

If I was a woman in Russia I would be a lesbian, as the men are very ugly. There are a few handsome ones, like Naomi Campbell’s boyfriend, but there you see the most beautiful women and the most horrible men.

On M.I.A. flipping the bird:

Nowadays people give the middle finger quite quickly — it’s not the best behavior. Everybody does that, what’s new about that? It’s just become a bad habit. People in magazines are 50 percent bimbo and 50 percent pregnant women.

Yes he does [deserve to be re-elected], especially because of Mrs. Obama. I’m a big fan of Mrs. Obama – and her face, I think, is magical. He would not be there without her. Mrs. Obama is not a fashion statement, but she has other things to do. My favorite thing about Mrs Obama was when she was asked if her skirt was not too tight and she answered “Why you don’t like my big black ass?”* I want [Barack] Obama to win because there is nothing better anyway, and especially because of her.

I never voted in my life. I will never vote. I know too much about politics from what’s going on backstage. To vote you have to believe all that garbage that they promise you, and they can’t keep those promises. If someone gave me an Obama pin, I would just put it on.

On being politically correct:

The Stars Came Out, Sadly

A ‘Women’s Way’ For Hipsters