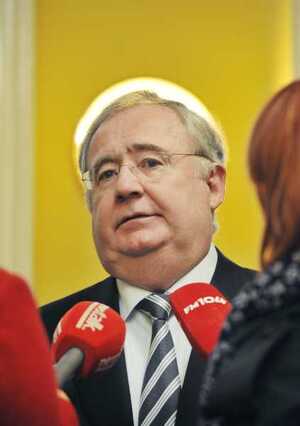 Minister for Communications Energy and Natural Resources Pat Rabbitte went on Morning Ireland (with Gavin Jennings) earlier to discuss the impending sale of state assets (and disposal of proceeds) AND defend – in pretty lame fashion – the awarding of super super allowances to junior ministers. The row is part of what he calls Ireland’s “unerring instinct for the peripheral”. Cheek.

Pat Rabbitte: “Well what has changed is that we came in on a memorandum of understanding negotiated in November 2010 by the previous government that committed the state to a programme of the disposal of state assets. The figure being mooted that was an expectation that we would dispose of up to five billion in state assets. Subsequently, the new government renegotiated that, and the memorandum was revised to say an “ambitious” programme of disposal of state assets. What that meant… there was no figure on it, but it meant less than five billion. And since then the negotiations have gone on, right up to the most recent engagement when the most significant breakthrough was made which is that whatever the programme of state assets to be sold, a significant proportion will be allowed to the Irish Government for purposes of re-investment here in the domestic economy. That’s the significant breakthrough. From the discussions that Michael Noonan and Brendan Howlin have been involved in, Brendan Howlin has been following up the details subsequently with the Troika. We’re now satisfied that that matter has been finalized in respect of a significant portion of the proceeds being allowed for re-investment purposes. ”

Jennings: “You say significant, how much?”

Rabbitte: “Well nothing has come to government yet on this. As you know, the only decision that government made some months ago was that it would be prepared to sell a minority stake in the ESB subject to due diligence. Now, that due diligence report has been presented to me and a separate that can be called a due diligence and hasn’t been done with the same forensic analysis, more a survey, has been done of the other enterprises in the state cupboard. It’s more a survey to assess what, if we had to sell, at the behest of the Troika, what might we sell  and what would be the  indicative prices. Now those two reports are now available, but haven’t yet gone to government.”

Jennings: “So you don’t know how much you think you could raise from the sale of state assets, or how much of that you could hold on to yourself?”

Rabbitte: “No, i didn’t quite say that, I said it hasn’t been decided by government yet. The question…”

Jennings: “Well, what would you like? How much would you think?”

Rabbitte: “Well, if you were to ask me Gavin, I don’t like being in this position at all. But that’s the position we’re in…”

Jennings: “Which you are, so how much do you think…”

Rabbitte: “…in the case of Greece & Portugal the sale of state assets has been forced by the Troika. Ireland can not get away entirely and will have to sell some state assets. I welcome very much the fact that the Troika is putting no pressure on us in terms of timelines or a deadline. They acknowledge that in present market conditions, going to the market would only result in a fire sale and nobody wants that and we’re not required to do that, and I welcome that but when we do go, a significant proportion of the proceeds may be used for domestic reinvestment purposes.

Jennings: Just to read out the line from the new memorandum of understanding, and this is the letter from Michael Noonan in the opening page of it: ‘We have also agreed in broad terms and ambitious approach to be pursued to ensure that state-owned assets are efficiently mobilized to reduce the government financing needs and to provide some additional resources for re-investment in job creation initiatives in the economy while also increasing the over-all efficiency of the economy.‘ What’s not clear from this, or from the previous memorandum of understandings is whether the Troika are telling you you need to sell state assets or whether they’re telling you that if you do so, how much of it would be needed to pay off debt?”

Rabbitte: “Well I’m very surprised that there’s any doubt about this. In the very first memorandum of understanding, negotiated by officials and with no involvement by the then government which seemed to be in complete disfunction at the time, it was a requirement of the memorandum of understanding the the Irish government would dispose of state assets, so that’s the origin of the proposal. The new government came into office against that background. We agreed that we would be prepared to dispose of up to two billion in the sale of non-strategic state assets. It is somewhere between those two positions that we have been seeking to finesse the negotiations ever since.”

Jennings: “But would it not be better to negotiate…”

Rabbitte: “[I] should mention that Brendan Howlin has since been involved, since the formal engagement some three weeks ago, in further seeking to progress that. He has progressed it and will in his own time, and I expect sooner than later come to government with a total over-government position.”

Jennings: “You have may have heard from Sinéad Penton earlier on from the think tank TASC. She feels it’s a bad idea to sell state assets at all. There would be several within your party, I don’t know what your own position is, you said something of it earlier on, that a lot of you felt that it’s a bad idea to sell these off. Would it not have been better to negotiate with the Troika that we should hold on to our state assets, rather than selling them off at all? Or rather than looking for a divide over whether some which would be used to pay off debt, and some which would be used for job creation?”

Rabbitte: “Well, I think that presumes that the option is there. The option isn’t there. We can’t escape scot-free in circumstances where Portugal and Greece have a very heavy position on them. In any event, when you examine the state enterprises, company by company, or issue by issue, you may well decide that given the dire straits that this country has been plunged into economically that it is a better use of some of the assets concerned that they should be used to create new employment and [for] re-investment purposes. The important thing is that we hold on to the networks, I’ve always made that clear. We had a painful experience when the Fianna Faíl government privatised Eircom which threatened investment and starved the country of necessary investment and broadband for so long and we’ve learned that lesson and we’re doing our best within a pretty impossible hand of cards to ensure that what is sold off does not damage the strategic interests of the country in terms of essential infrastructure. ”

Rabbitte: “Well, as I say the tentative decision was made by the government subject to due diligence that the minority stake in the ESB would be sold. Now, the report is now with us. It  doesn’t throw up any surprises from the point of view of my department. But perhaps some of my colleagues will be surprised that there is quite a difficult unravelling process in terms of regulatory considerations, in terms of corporate government and in terms of ESOP [ESB employee share scheme] and in terms of other issues that were thrown up in the complexity and the energy area. The fact remains that real value is reposed in the energy companies. You can deal with issues like the remaining stake in Aer Lingus, or you can deal with looking at selling off the trees, the timber in Coillte as distinct from the land. But the proceeds really are not very high. And in those circumstances you come back to real value being reposed in the energy companies. I find it very difficult to envisage circumstances where two energy companies would be on the market at the same time. And I find it very difficult to envisage a portfolio that didn’t include a part of one of the energy companies in order to make up the quantum that is likely to be required of us when Brendan Howlin brings his memorandum to cabinet. ”

Jennings: “When will he bring that memorandum to cabinet? When will we know what’s going to be sold?”

Rabbitte: “Well I would have thought that he will bring it sooner than later. There’s no compulsion on us between now and the next review. At the next review, we have to be able to talk tangibles.”

Rabbitte: “Well, a bit less than that now but I would have thought that Brendan Howlin is likely to come well before then.”

Jennings: “Can I ask you about a separate issue? We mentioned this in our bulletins earlier on. This is the payment of an allowance of more than €17,000 to two ministers of state. And this was on Late Debate last night on RTÉ Radio One with Cormac O’Hara. Senator Michael D’Arcy of Fine Gael criticised the allowance, he said that they should give it back. He was talking of course about Jan O’Sullivan, your own party colleague, and government chief whip Paul Keogh. What do you have to say about that?”

Rabbitte: “Well, sometimes our public debate has an unerring instinct for the peripheral. Jan O’Sullivan was promoted to cabinet and has got the rate that goes with the job. It’s a greatly reduced rate from that obtained when Brian Lenihan and Brendan Smith and others held the position she now holds. It unfortunately was touted around the media by Sinn Fein’s Pearse O’Doherty that Jan O’Sullivan got this payment, that it was tax-free and that the chief whip got it. The chief whip didn’t get it, and it wasn’t tax free. Jan O’Sullivan pays the same tax as you and I. The chief whip got whatever the rate for the job of the chief whip has been since 1922 when he was appointed to the government. I mean our capacity to… it’s like the interview you had with the unfortunate Fianna Fail deputy earlier. I mean, if this is the level of discussion at a time that the country is virtually bankrupt after the disfunction of Fianna Faíl, I really find it very difficult. I find it difficult to take it seriously.

Rabbitte: “Are you suggesting that a tiny Island nation that is trying to trade with the rest of the world,shouldn’t promote itself and promote the Taoiseach when he meets foreign leaders and tries to sell Ireland abroad? It’s a fraction of the spend of the Taioseach of the day [Bertie] on photography not to mention the people that he had for special make-up purposes every day. I mean, this has to be seen in perspective. The government has to do its job to the best of its ability to sell this country and put its best foot forward. We’re trying to win investment and win business for Ireland, and this kind of… I mean, it would be best if this kind of pernicious, ad hominem personal rumors from Sinn Fein were ignored, and better that Fianna Faíl be ignored given what they’ve done to the country. ”

Rabbitte At Rest: The Video