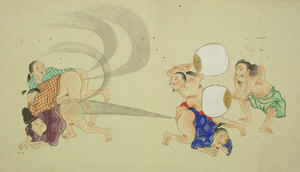 Blogger Hashi discovered a rather wonderful piece of Japanese art which he sums up beautifully:

The whole scroll, which is called He-Gassen (“The Fart Battle”) is just about people farting. Farting at other people, farting at cats, farting off of horses, farting into bags; just farting everywhere.

I kept expecting to find some deep cultural explanation as to why these guys made whole scrolls about farting. But I think it really just boils down to one universal truth: farts are funny.

You can’t say fairer than that.