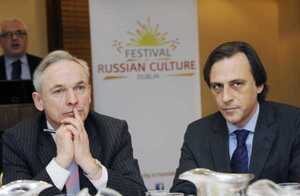 Richard Bruton with economist (and chairman of the Ireland Russia Business Association) Constantin Gurdgiev at a breakfast briefing on Russia this morning, part of the Dublin Festival of Russian Culture 2012. 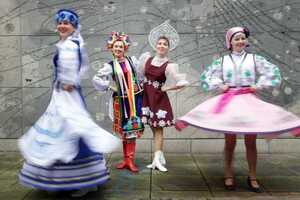 The week long festivities culminate in a family day on Sunday February 26th (traditionally celebrated in Russia as Maslenitsa or Pancake Day), where entertainment  will take place in and around Cow’s Lane and Essex Street, Temple Bar. The centrepiece concert of the festival at the Olympia Theatre, featuring renowned Russian performer Oleg Pogudin, also takes place on Sunday at 2:30pm and 5pm.