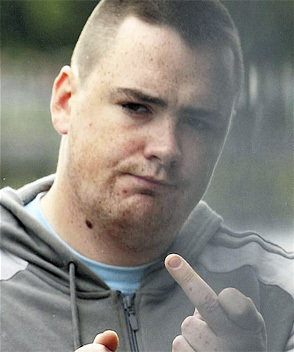 April Collins (24) — the chief prosecution witness in a Special Criminal Court trial against brothers Wayne (33) and John Dundon (30) — said she was terrified after Wayne threatened her, “as I knew he’d kill me”.

April Collins said she ended her relationship with the defendants’ youngest brother Ger Dundon (above) in October 2010.

They have three sons together and the court heard Ms Collins stopped bringing the children to jail to see their father.

“The court heard that Ger Dundon employed a priest and a nun to bring his children to prison to see him.
Ms Collins admitted that her former partner often got a priest and nun to ring her, but she instructed the prison to take her phone number off his prison calls. The trial continues.”

April Collins Tells Dundon Trial In Dublin That She Was Terrified By Threats To Kill (David Hurley, Limerick Leader

‘GAA: Desecration Of The Sabbath’