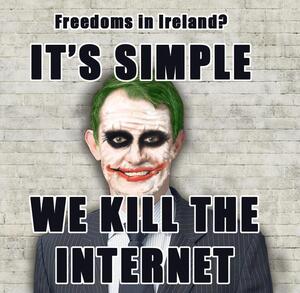 Of course, the end result is that the government appears to be trying to move in two different directions at once. On the one hand, it’s catering to the legacy entertainment industry interests and hindering the internet as the platform that enables new business models… while at the same time paying lip service to how it has to increase such innovation. Here’s a tip: the first thing towards increasing innovation in business models online is not putting misplaced liability on service providers, not setting up a censorship regime, and not removing the incentives for the entertainment industry to actually embrace innovative business models.

Most importantly, it is a disgraceful decision, not because an unprecedented 80,419 people mobilised in the space of a few days and told Ministers Bruton and Sherlock that they were wrong to take this action.

It is a shameful decision because the Government knows that those 80,419 people were right, and have done the wrong thing anyway.

Response To Signing Of Sopa (StopSopaIreland)

For better or for worse, this is now known at home and abroad as “Ireland’s SOPA”. SOPA was despised among big tech multinationals in the US, who are Ireland’s main hope for inward investment at the moment. Last night [Tuesday], the chief executive of Google, which employs over 2,000 people in Dublin, described moves such as the US version of Sopa as “worrying”. “We need to act now to avoid the rise of this digital caste system,” said Eric Schmidt at Mobile World Congress in Barcelona.