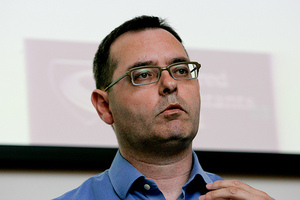 SOPA Ireland got passed into law [last night] despite the protests of 80,000 people. I ask you, what do we have to do to move the needle for the venal deadbeats that have brought this country to its knees? These people want to hand it over piecemeal to every transnational corporation who comes looks looking for a piece of the action.

If democracy can’t work like this how is it supposed to work?

We spent the last 50 years eradicating the anti-democratic forces that turned Northern Ireland into a battlefield only to find the enemy has always been amongst us. The Trilateral Commission in 1973 bemoaned “The Crisis of Democracy” surrounding the protests associated with the Vietnam War. They would have smiled benevolently on our current government’s ability to blithely ignore the concerns of the electorate in order to serve the “the needs of the market” i.e. the music industry who put a gun to its head after the Eircom three strikes ruling was overturned.

We apparently “must legislate” because the EMI told us so.

What should we do? What can we do? Our government has slapped us on the arse and told us to go to bed.

If as a democratic state we no longer have democracy then the alternatives are bleak indeed.

Via (with Joe’s permission) The Shame Of Sopa Ireland (Copacetic)