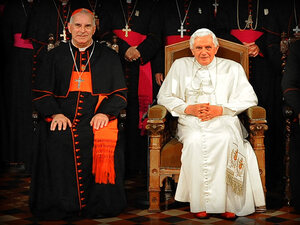 The Roman Catholic Church is planning to enlist the support of more than a million regular worshippers in opposition to Government plans for same-sex marriage.
Senior bishops are preparing to draw up a letter to be read at Masses across England and Wales when the Government consultation on plans to redefine marriage gets under way later this month, it is understood.
It would be only the second time in recent history that a joint pastoral letter on behalf of all Catholic bishops in England and Wales has been issued on an issue of political importance.
The move is being proposed as the debate over extending marriage to homosexual couples gathers momentum. At the weekend Cardinal Keith O’Brien (left), the most senior Catholic cleric in Britain, accused the Coalition of trying to “redefine reality” and branded the proposals a “grotesque subversion of a universally accepted human right”

Catholics Will Be Called To Oppose Gay Marriage (Telegraph)