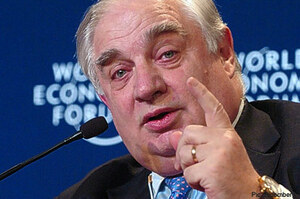 Confirmation from Bloomberg about the deal Greece did with Goldman Sachs in 2001. Former Fine Gael-appointed Attorney General Peter Sutherland, a vocal opponent of burning the bondholders, has been chairman of Goldman Sachs International since 1995

On the day the 2001 deal was struck, the government owed the bank about 600 million euros ($793 million) more than the 2.8 billion euros it borrowed, said Spyros Papanicolaou, who took over the country’s debt-management agency in 2005.

By then, the price of the transaction, a derivative that disguised the loan and that Goldman Sachs persuaded Greece not to test with competitors, had almost doubled to 5.1 billion euros, he said.

Papanicolaou and his predecessor, Christoforos Sardelis, revealing details for the first time of a contract that helped Greece mask its growing sovereign debt to meet European Union requirements, said the country didn’t understand what it was buying and was ill-equipped to judge the risks or costs.

They Gave Us Democracy