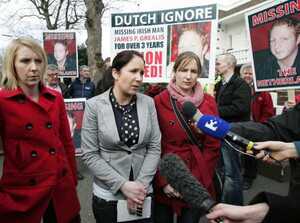 Sisters of missing Achill man James Grealis, from left, Caroline O’Connell, Helen Grealis and Bernadette Spinalley. James disappeared after leaving a guesthouse in  the Dutch town of Breda to look for work on October 23, 2008. The Grealis sisters handed in a letter to Ambassador Robert Engels at the Netherlands embassy, Merrion Road, Dublin, telling him that they are not satisfied with the progress of the investigation thus far.