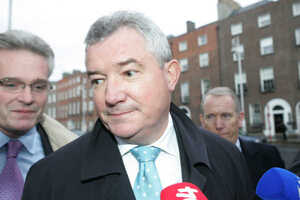 Bank of Ireland CEO Richie Boucher was paid a total of €623,000 last year. [A] spokesperson said Mr Boucher’s core salary was €500,000, which was within the Government’s salary cap.

He was paid a further €123,000 as pension cash allowance for waiving his right to retire at the age of 55.

Well, at least BoI recorded a loss of only €190 million last year.

And it’s not like Richie was around when all the problems started.

That Bank Of Ireland Scam In Full

Meanwhile At The Bank Of Ireland, College Green

It’s A Pilot Scheme, They Said

Are You With Bank Of Ireland?