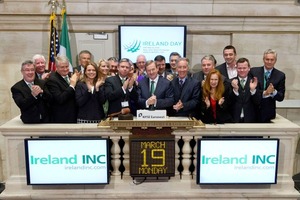 Minister OF State Lucinda Creighton has said the Government should avoid inviting businessman Denis O’Brien to another economic forum in Dublin due to the findings of the Moriarty tribunal.

…Ms Creighton was then asked whether it was at odds with the Government’s investment drive that the winner of the phone licence in the circumstances criticised by Moriarty was going around as one of Ireland’s chief promoters. “That’s a fair point,” she responded.

O’Brien Should Not Get Forum Invite, says Creighton (Irish Times)

Irish recruiter Saongroup, which is majority owned by Denis O’Brien, is planning to invest €25 million and expand its presence in China to 130 cities by the end of 2013.

The investment was announced overnight at Saongroup’s Beijing office by Minister for Jobs, Enterprise and Innovation Richard Bruton during Enterprise Ireland’s trade mission to China, led by Taoiseach Enda Kenny.