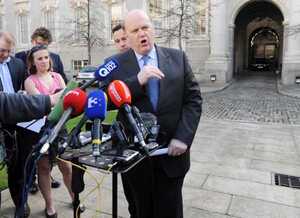 “However, effectively what is happening is that the Irish government are providing the IBRC with a long-term bond, the IBRC are exchanging that bond with Bank of Ireland for one year in return for €3.1 billion in cash and this cash will be used to repay the IBRC’s Emergency Liquidity Assistance (ELA) loans.

What has been achieved? In essence, the government has delayed paying out the cash for this year’s €3.1 billion but the IBRC (and hence the state) now has to repay Bank of Ireland this amount next year. This is effectively a one-year deferral of this payment, which is far worse than the long-term deferral of the payment that I had already described on Saturday as “fairly meaningless”.

Because the ECB have fully achieved their goal — getting a full €3.1 billion ELA repayment — calling this “a deal” with the ECB is hardly appropriate. Rather, it represents an arrangement with a privately-owned Irish bank that maintains the appearance of some sort of deal having been agreed with the ECB.”