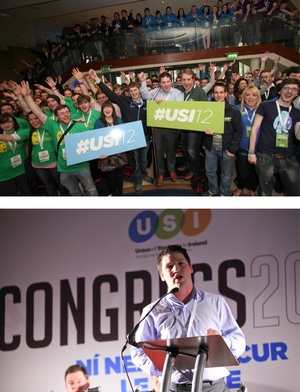 Some of the 300 delegates (representing 250,000 students) at the Union of Students in Ireland annual congress in the Carlton Shearwater Hotel, Ballinasloe, Co Galway, which started today. President Higgins addresses the gathering on Wednesday.

USI president Gary Redmond (above) opened Congress by berating Minister for Education Ruairí Quinn for cancelling his scheduled address at the last minute.

“Minister, why won’t you come an explain yourself?” said Redmond as he asked why Quinn was happy to pose for the signing of a pledge not to raise the student contribution before the general election, but wasn’t prepared to defend the U-turn he made when he got into office.

Revenge Of The SERD