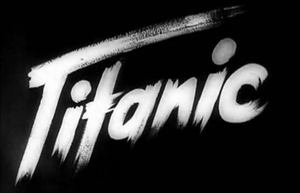 Long before James Cameron’s version of Titanic, there was a Nazi propaganda film made in 1943 about the ill-fated voyage. Both share the dubious honour of being the most expensive films of their era, but only one of them was banned.

The whole film is now on YouTube if you’re up to watching a skewed view of the disaster.