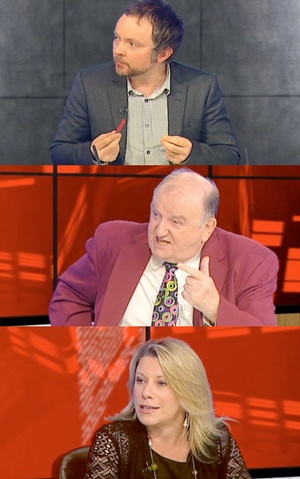 Gavan Titley: “If you look at what [Sunday Independent editor] Anne Harris is arguing she’s saying there’s an absolute firewall between management and editorial. In this instance [Mahon and Moriarty tribunals], it hasn’t been proven to the final legal point that corruption took place. But what these give us together is  a highly oligarchic.”

Titley: “Exactly..a highly oligarchic picture of Irish public life. We come to these issues around media ownership and normally, in other countries, when they debate issues of media ownership, it’s in relation to the impact of different percentages of media ownership, cross media ownership, the accumulation of power in relation to democracy. When we get here to start talking about the impact of media coverage on the media, it immediately comes back down to these angels-on-a-pinhead debates.
What we can see from the tribunals and what we can see from the way in which this story is covered is a small network of people with immense power, immense power which has been beneficial to each other over long periods of time. Immense power which has not been beneficial to vast swathes of the population in this country. And the real questions come down to this. We now have some form of public accounting of what happened in governance in Ireland, through the tribunals, with all their wastage, over a significant period of time. What we have now is an indication of the kinds of values, as we can see in these articles, that inform the way in which mainstream media, a lot of mainstream media in this country, approaches their job in relation to holding power to account, representing plurality or the public or whatever it might be. So we don’t need to prove, for example, that there isn’t a firewall between editorial and management, this is always one of the most difficult things to prove when it comes to looking at the impact of major media coverage. Looking for the smoking gun, or looking for causal factors have always been difficult to prove. But what you can look at over periods of time is what are the questions that are asked, what are the issues which are addressed, whose identities, whose social experiences, whose lives simply don’t feature in any of these newspapers or media coverage? And that’s what we should be talking about in an Ireland that’s in crisis. Not looking at this kind of royal court of oligarchs.

George Hook: “Who do you want to own the Independent?”

Titley: “I really don’t care who owns the Independent.”

Titley: “But when you talked about who benefits from this. You were mainly talking about the shareholders. The traditional, and somewhat quaint, idea of a newspaper, is that it informs people and that it informs people so they can act as citizens. These don’t feature in our debates in media in Ireland at all. We’re extremely comfortable with…

[They Talk over each other]

Hook: “So you don’t want it to be a public company anymore then?”

Titley: “That doesn’t follow from what I said at all. It really doesn’t bother me whether the current arrangements in the Independent Media group persist or whether Denis O’Brien takes over. What bothers me is the overall picture in terms of media diversity and it’s very interesting to look at that, in terms of the recent conference in which Nessa Childers (Labour MEP) had on media diversity where one of the things that she did for that, and I looked at the report earlier, was she did a survey of 100 journalists.
Now 100 journalists in Ireland, when you look at it is a reasonable-sized survey and what she asked them was: Has Ireland got adequate media diversity as things stand? 32% of them strongly agreed but 36.6% disagreed strongly and 20.4% disagreed quite generally. 77.5% thought that media diversity is at risk due to trends in media ownership. So while most journalists in this survey, who are quoted, would very much agree with you that when it comes to the day-to-day work of what they do and what they produce that there isn’t any kind of direct hand on their shoulder what they do see is that under current conditions we have problems with media diversity. And that has knock-on impacts on democracy. And that’s putting in brackets the fact that we don’t actually live in a proper democracy.”

Titley: “John Lloyd, one of the editors of the Financial Times, who was also speaking at this conference on media diversity, made the point exactly as you said, strong regulation is one dimension of it. But regulatory frameworks in Europe, and elsewhere, are in trouble at the moment because of changes in the media economy. How do you regulate properly across media, how do you regulate digital media? This is quite difficult at the moment. But the other point that he makes which is well worth making is, as he put it, the reasons why owners own media rather than Apple shops is important. Now let’s go back to looking at that nexus between politics and media in Ireland. The Ireland First document, if you remember the Irish Times turned over part of its online section to this massive PDF, which was put together kindly for us by three tax exiles, who nevertheless wanted to tell citizens how they want to rejuvenate our democracy. Tony O’Reilly, O’Brien, Dermot Desmond, there were many others involved in it. Ray McSharry, John Bruton, Peter Sutherland. One of their recommendations for political reform was to look at the media and, to quote, “There needs to be a positive engagement between editorial and ownership senior management of media organisations in order to ensure we have balanced coverage and good news stories are covered”. Now, as one element of political reform what this group of politicians, and former politicians, media owners and consultants, were arguing, was that there need to be, essentially, political interference in the media in Ireland to guarantee good positive stories. We know what good positive stories means. They mean you don’t report in anyway the fact that we have a massive crisis of capitalism in Europe or elsewhere because a report on that would endanger the conditions for the sovereignty of profit, which is ultimately all they are interested in. Now that’s why this is of interest in this discussion, more than Murdoch in the States. Because this is particular to Irish democracy at this moment in time.

Browne: “There’s an issue that arises out of what Gavan has just said. The coverage of our circumstances and the economy right now. Eamon Gilmore said, at the Labour party conference that the present Government can turn the economy around. Enda Kenny said more or less the same at the Fine Gael party conference a few weeks ago. The reality is that we are in dire circumstances yet again. Last year, by the most reliable measurement of economic performance, namely GNP, the economy contracted again by 2.5 per cent. And in the last quarter of last year, it contracted by 7 per cent. Now how is it that that hasn’t got much attention in the media at all, that we are in the midst of a really vicious double-dip recession. It’s a bit odd.”

Hook: “Do you want an answer to that?”

Hook:” The old idea that bad news sells newspapers no longer exists. Because such is the nature of the bad news that people are actually turning off their radios and are ceasing to buy newspapers.”

“I Have Fallen In Love With Money”