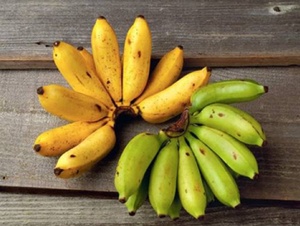 Did you know that bananas cannot reproduce? That they are sterile hybrids created by a cheap low tech form of cloning?

Well we didn’t. We thought they were the actual fingers of banana monkeys. Shame on us.

The downside to this is that clones are, shall we say, not terribly genetically diverse. Turns out, a lack of genetic diversity is a great way to make yourself vulnerable to disease. Back in the 1950s, a fungus all but wiped out a variety of banana called the Gros Michael. Up until then, the Gros Michel had been the top-selling banana in the world. It was the banana your grandparents ate. You eat the Cavendish, a different variety that replaced Gros Michael largely on the strength of its resistance to the killer fungus.

The disease banana plantations now fear: Black Sigatoka, a different fungus that can kill trees and reduce yields in the survivors. The solution: Goldfinger, a new banana clone bred to resist Black Sigatoka.

And so farewell Cavendish, hello Goldfinger.

‘They were bigger in my day’, you’ll tell your grandchildren. ‘Sure there’s no aytin’ in these little yokes at all’.

The Unfortunate Sex Life Of The Banana (Damninteresting)

Yes, But Will It Be Tasty?