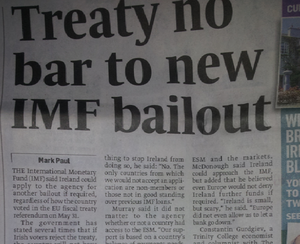 Ireland could apply to the IMF for another bailout regardless of how we vote in the fiscal treaty referendum.

Yesterday afternoon, Michael Noonan released a statement saying this was not true.

But within the last 30 minutes:

The Tánaiste Eamon Gilmore has said Ireland could apply to the IMF for a second bailout even if the country votes against the EU Treaty referendum.

Gilmore: Ireland Could Apply To IMF For Money Even If Treaty Rejected (BreakingNews)