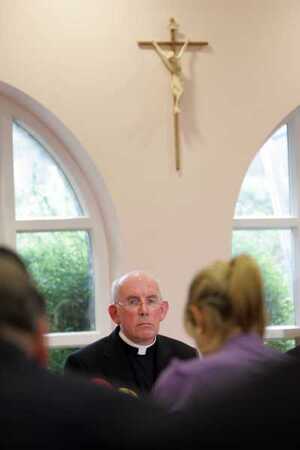 I won’t resign: ” I have worked with others in the Church to put these new procedures in place and I look forward to continuing that vital work in the years ahead.”

I didn’t lead the investigation: “I was asked by my then Bishop (Bishop Francis McKiernan of the Diocese of Kilmore) to assist others who were more senior to me in this Inquiry process on a one-off basis only”

BBC programme exaggerated my role, I was just a note-taker: “Any suggestion that I was other than a ‘notary’ in the process of recording evidence from Mr Boland, is false and misleading”

I did interview one of the children identified by Brendan Boland: “Acting promptly and with the specific purpose of corroborating the evidence provided by Mr Boland, thereby strengthening the case against Brendan Smyth, I subsequently interviewed one of the children identified by Mr Boland who lived in my home diocese of Kilmore. That I conducted this interview on my own is already on the public record. This provided prompt corroboration of the evidence given by Mr Boland.”

I feel betrayed but the Catholic Church is now much more open, transparent. There is no more silence: “With others, I feel betrayed that those who had the authority in the Church to stop Brendan Smyth failed to act on the evidence I gave them. However, I also accept that I was part of an unhelpful culture of deference and silence in society, and the Church, which thankfully is now a thing of the past.”