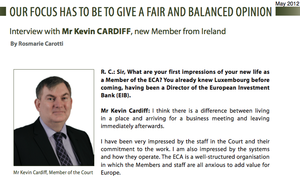 The former General Secretary at the Department of Finance, who oversaw the September 2008 bank guarantee and a (still unexplained)  €3.6 billion accounting error in the State’s books, before being parachuted into a €276,000-a-year job in the European Court of Auditors, has given an irony-soaked interview with an in-house EU journal.

On watching out for risks: “I think there has to be a careful balancing of the work priorities to make sure that we address the  areas of risk and interest for Europe. By interest I mean Europe’s policy interests not just those things that are interesting in a gossip sense.”

On Renaissance Italy:  “…the Court (of Auditors) stands as an institution itself, so it is not a question of whether it becomes like the Guelphs  and the Ghibellines in Renaissance Italy, attaching itself to one party or another.

On Ireland’s financial woes: “…Ireland is a country in a sort of transition. We have had a very deep recession and  at this stage we have already had several years of economic adjustment. The adjustments occur at  a cost for the citizens.  The fiscal adjustment is essential but it is very painful.” “…the bond yields have fallen very significantly. In the perception of the markets,  Ireland has appeared to create an identity of its own and there is a real potential there for Ireland
to access market funding in its own right and not rely purely on the EU and IMF programme  support. Indeed, Ireland recently made a small fund-raising in the market, short-term money, but  nonetheless it was a very good first step.”

A shout-out to the little guys back in Ireland: “..there is a rebalancing of economists’ and markets’ opinion about Ireland, which is a result of  concerted and determined efforts over a long period of time. But those efforts are at the cost of taxpayers and citizens who have to manage with fewer services or manage with less pay or higher  taxes.”

On the possibility that he could be working on the European Stability Mechanism (ESM): “..That is a very interesting development because the new ESM will have its own  particular character and structure and it must be properly audited. We should, as I said earlier, be available as a resource for European efforts, and this is one of the ways in which we are available to assist.”

On ‘naming and shaming’ those who break the EU rules: “..Our focus has to be to give a fair and balanced opinion based on the information we have, and to  give it in a way that provides the stakeholders with the information they need to decide whether  to be reassured or whether intervention or change is necessary. We are neither journalists nor  prosecutors. This is an audit institution and it needs to focus on its own objectives. If that sometimes  means providing information that includes the names of countries or institutions,, why not, but it  is not about providing a particular story, it is about providing the informational base for decisions.  As long as we stick to that priority, we get the balance right.”