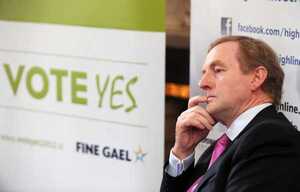 Meanwhile, the Irish are getting similar treatment [to the Greeks], as the country’s elites try to scare voters into backing the EU’s permanent austerity treaty in a referendum later this month.

Crucial to the campaign has been the threat that Ireland will be denied future emergency bailout funds for its own shrinking economy if the treaty is rejected.

…But in both cases, the threats are phoney. The legal basis of the treaty clause the Irish government is claiming would cut off future bailout funds is strongly contested and the prospect unrealistic.

…There is now a strong likelihood that [Greece] will end up leaving the euro, whichever way it turns – and that may well offer Greece the most realistic chance of eventual recovery. But it’s not what parties such as Syriza are demanding. Instead, its leader Alexis Tsipras has been in Paris and Berlin this week calling for a halt to Greece’s debt repayments, and negotiations with Europe’s leaders on a new deal.

The stronger the vote for anti-austerity parties, the better the chance that those negotiations could produce more than cosmetic results. That’s because the threat of a disorderly Greek default – which could still take place inside the euro – has the potential to trigger a cascade of bank runs and knock-on crises across the eurozone whose impact could dwarf the Lehmans crash of 2008.

In Or Out Of The Eurozone, We Must Ditch This Failed Model (Seumas Milne, The Guardian)