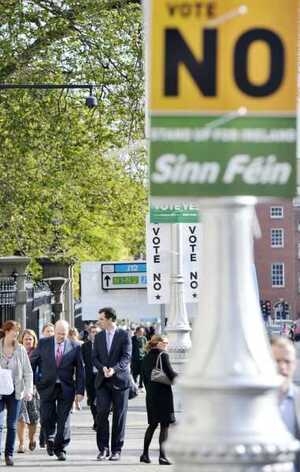 But after three grim years as the “poster child” for austerity measures – unlike Greece, Ireland has not baulked at painful cost-cutting programmes – there is already a growing sense of all pain and no gain. The recent election of anti-austerity parties in Greece and the socialist Francois Hollande as French president has further boosted a Left-driven “no” campaign, to the point where the referendum is no longer the certain “Yes” that the government had hoped.

…An Irish “No” would not by itself derail the fiscal treaty, because only 12 eurozone countries are required to ratify it for it to come into force. Already, Romania, Portugal, Greece, Slovenia and Slovakia have done so. However, it would embolden increasingly powerful anti-austerity campaigns in bigger eurozone countries like Italy and Spain, any of whose failure to participate could effectively sink the project.

“A No vote in the only popular poll on current efforts to save the euro would be hugely damaging to the treaty, in that it would signal to investors that if it was put to a vote in many countries, it would not get past,” said Hugo Brady, of the Centre for European Reform.

“The sense of a backlash against austerity would be much enforced.”

All pain, No gain: The Irish Backlash That Could Mean A ‘No’ To Europe’s Austerity Plans (Colin Freeman, Telegraph