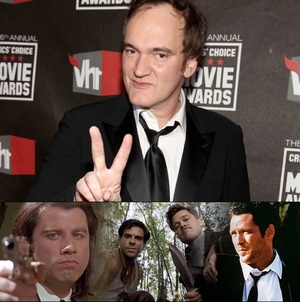 A phenomenon recently (but not for the first time) highlighted in an article on Cracked are the myriad links and overlaps connecting the movies of Quentin Tarantino. Little things, like the fact that Michael Madsen’s character in Reservoir Dogs, Mr Blonde (the only one not known solely by his code name) is called Vic Vega. Tarantino has already confirmed that Mr Blonde is the brother of Vincent Vega (John Travolta’s character in Pulp Fiction).

But there’s more. As Redditor FrancisDollarHyde succinctly puts it:

Warning: Inglourious Basterds spoiler ahead) As it turns out, Donny Donowitz, ‘The Bear Jew’, is the father of movie producer Lee Donowitz from True Romance – which means that, in Tarantino’s universe, everybody grew up learning about how a bunch of commando Jews machine gunned Hitler to death in a burning movie theater, as opposed to quietly killing himself in a bunker.

Because World War 2 ended in a movie theater, everybody lends greater significance to pop culture, hence why seemingly everybody has Abed-level knowledge of movies and TV. Likewise, because America won World War 2 in one concentrated act of hyperviolent slaughter, Americans as a whole are more desensitized to that sort of thing.

Hence why Butch is unfazed by killing two people, Mr. White and Mr. Pink take a pragmatic approach to killing in their line of work, Esmerelda the cab driver is obsessed with death, etc.

You can extrapolate this further when you realize that Tarantino’s movies are technically two universes – he’s gone on record as saying that Kill Bill and From Dusk ‘Til Dawn take place in a ‘movie movie universe’; that is, they’re movies that characters from the Pulp Fiction, Reservoir Dogs, True Romance, and Death Proof universe would go to see in theaters. (Kill Bill, after all, is basically Fox Force Five, right on down to Mia Wallace playing the title role.)