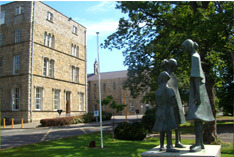 It concerns the case of a fifth-year student at fee-paying Mount Anville in Goatstown [Co Dublin] who was abducted last month by sixth-year schoolmates and left tied to a post in a nearby boy’s school.

…The girl was tied up with builder’s cable cord, blindfolded and driven to Blackrock College while five other sixth years followed behind in another car.

The girl was verbally abused and left alone on the school grounds tied to a post, after a bottle of water was poured over her.

Only Connect With Friends

Animation: To This Day