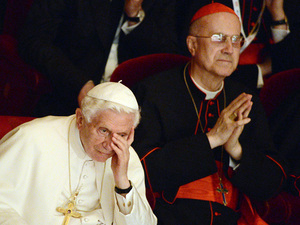 The interview with Cardinal Tarcisio Bertone (right)  who ranks second only to Pope Benedict in the Vatican’s hierarchy, was the latest attempt at damage control by senior Vatican officials since the leaks scandal began in January.

In a rare interview with the Italian Catholic magazine Famiglia Cristiana, Bertone, the Vatican’s secretary of state, accused the media of “intentionally ignoring” the good things the Church does while dwelling on scandals.

…Bertone branded as false the image of the Vatican as a place of intrigue and power struggles, saying: “The truth is that there is an attempt to sow division that comes from the Devil.”