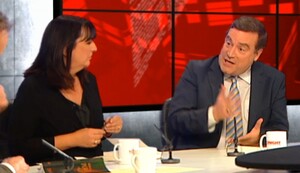 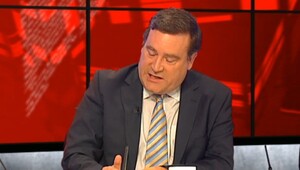 Vincent Browne: “Dan, you didn’t keep a diary I assume from reading the book?”

Dan Boyle: “Well, not a written diary. I had a lot of electronic sources I could refer to and I’d have had access to notes that were taken of meetings particularly towards the end. And I suppose I was able to research the press reporting at the time as well as others who written books on the same subjects.”

Browne: “One of the things that intrigues me about your attitude on this is, and indeed Fianna Fail’s attitude, and I the attitude a lot of other people in the Green Party, is that even in hindsight you still think that the bank guarantee was a good idea.”

Boyle: “I don’t say that Vincent.”

Browne: “What you say is ‘I remain convinced that a wide scale bank guarantee had to be put in place’.”

Boyle: “We’re seeing that at the very moment in terms of Spain. Spain has just got a €100billion package for their banks and the international money markets that Spanish lending, as a government, as a state, is compromised.”

Browne: “Not true. The money given to the banks, the money given by the EU institutions by the bank is given in the first instance to the sovereign, to the Spanish sovereign, to the government state, and they’re giving it on to the banks. And it’s because of that, because of this debt is being inflicted on the Spanish state that there’s a problem with the financial market.”

Boyle: “The Spanish government are represented as different from the sovereign – markets haven’t accepted that.”

Boyle: “Well I think that comes through.”

Browne: “So you’re completely wrong on that issue.”

Boyle: “Well that’s your opinion of it Vincent.”

Browne: “No it isn’t my opinion, it’s fact. You’re completely wrong on that issue. But go on.”
Boyle: “Well.”

Boyle: “Well  if you say it is Vincent, I’ll take it as your fact, right. The third instance is that in terms of the freedom of movement and you have to remember that Irish public expenditure had already gone out of control even before Lehman Brothers. There was a collapse in tax receipts, borrowing by the Irish state increased over the same period and we went into the cycle where the 7 per cent came from Ireland and we found ourselves under pressure from the ECB and the IMF. And ultimately the freedom of movement was restricted because we were part of a multi-national currency.”

Browne: “Freedom of what movement?”

Boyle: “The ECB has always had, from day one, a right of veto practically as to how we approach this situation.”

Browne: “Absolutely not at all. Tell me, tell me under what authority is that?”

Browne:You’re just making this up.

Boyle: “Even at that stage, on the night of the guarantee being made, the ECB was providing liquidity support to Irish banks to the tune of €130billion.”

Browne: “Not at that time.”

Browne: “You don’t make that point in the book by the way.”

Boyle: “I do, I make those three points exactly.”

Browne: “In the book you make…”

Glenna Lynch: “Not about timescale, I don’t think Dan. You actually say [quotes from book] ‘Every piece of official advice we were receiving was telling us at that point, at that stage, that Anglo could achieve liability’.”

Boyle: “I point out the lack of distinction between the sovereign debt and the bank debt from international money purses. I point out the fact that the liability accrues because of the failure of the Irish state to regulate banking properly and I point out that fact, and in terms…”

Browne: “OK, OK. So in other words I was correct in interpreting your position as – even in hindsight, you did the right thing.”

Browne: “So here we go, and it’s the same with Fianna Fail, you people still believe that the most devastating single decision taken by the State since the Civil War that you’re still right. There’s a…It sort of suggests there’s no hope for you people.”