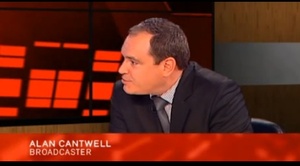 Vincent Browne: “Alan you wanted to talk about the Barclays {bank] story.”

Alan Cantwell: “Yeah I’ll come to that in a moment, but what’s interesting about the publications, particularly the coverage of the handshake was the lack of a picture of a queen on the front of [Sinn Fein newspaper] An Phoblacht. [looks to SF’s Mary Lou McDonald] Would that have been a bridge too far…for Republicans? Mary Lou? [smiles]

Vincent Browne: “I would imagine it was because it was printed several days ago.”

Mary Lou McDonald: “It would have gone to press.”

Cantwell: “Anyway….Let’s get to Barclays story. Interesting story this in fact. It’s an incredible story of deviousness…”

The Class Of TV3

‘Irish People Are Going To Pay For The Next 40 Years’