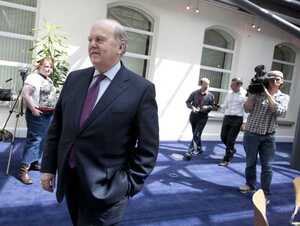 THE GOVERNMENT is working to a deadline of the end of October for reaching agreement with the European Union on substantial reductions in the State’s bank debts.

Minister for Finance Michael Noonan (above) will table the Government’s first proposals for a revised banking debt arrangement for Ireland at a meeting of EU finance ministers in Brussels next Monday.

However, Mr Noonan, Taoiseach Enda Kenny and Tánaiste Eamon Gilmore have all refused to quantify the scale of bank debt reduction they will seek when negotiations begin in earnest next week, although it is understood officials are working on a possible cut of upwards of half of the total €63 billion spent to date on bailing out the banks.

No, really. Good luck with that.

Phrase Of The Day: ‘Comfort Funding’