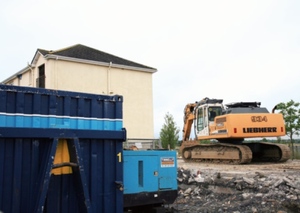 The unfinished Gleann Riada estate, Longford, where an apartment block is being demolished by Nama,

It wasn’t meant to be this way

A flood of other [planning] applications were made between 2000 and 2005, most of which were applied for in the name of Flancare Clonmel Distribution Ltd. They included a four-storey 110 bedroom hotel with leisure centre and swimming pool (approved), drive-through restaurant (approved), car showrooms (approved), 11 industrial units (approved), crèche (approved), service station (approved) neighbourhood centre with six retail units (refused) and a 15,000 m2 gross anchor unit retail space with adjoining shops (refused).

One of the major issues with Gleann Riada is its location on marshy land, that was historically a flood plain.