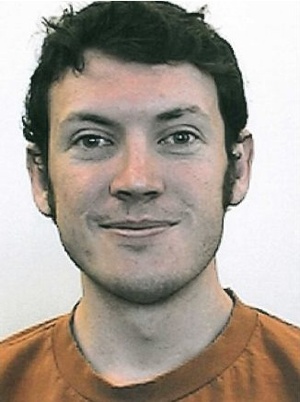 Documents show that a James Holmes (above) had been enrolled on a course called Biological Basis of Psychiatric and Neurological Disorders. He gave a presentation on May 8 on the topic of “MicroRNA biomarkers.”

He had previously graduated from the University of California in spring 2010 with a BSc in neuroscience.

Holmes was described as the “top of the top” in academic terms by his former university.

Timothy White, chancellor of University of California, Riverside, said: “He was an honours student, so academically he was top of the top.”

The suspect’s mother reportedly told a neighbour at the family home in California that that Holmes couldn’t find a job after finishing his studies.

Speaking to the Associated Press, Tom Mai said the family had lived in a well-to-do part of San Diego for about 10 years.

Holmes’s mother is a nurse and his father worked at a software company, Mr Mai said. The neighbour described the couple’s son – whom he spoke to on occasion only to say ‘hello’ – as shy and a loner.

Holmes was armed with an AR-15 assault rifle, a 12-gauge shotgun and a Glock .40-caliber handgun, said Aurora Police Chief Dan Oates. A .40-caliber handgun was found in his car, which was parked just outside the rear entrance to the cinema.

He bought a ticket to the midnight show, the first for the latest Batman movie, and entered the theater with the crowd, a U.S. law enforcement official tells the Associated Press. Holmes then allegedly propped open an exit door after the movie started, donned protective gear and started shooting.

Another source tells AP the assault rifle was equipped with a high-capacity, drum-style ammunition clip.

Who Is James Homes? (USA Today)