I am the producer of of a new ultra low budget independent Irish feature film called “Stalker”. ”Stalker” was written and directed by Mark O’ Connor (above), one Ireland’s up and coming young directors. It came runner up in the best Feature Film category at this year’s Galway Film Fleadh.

At the Fleadh, before the Stalker screening (and in this month’s Film Ireland magazine), Mark released a manifesto about his vision for Irish film and it’s future. He believes that Ireland is now seeing a new Irish New Wave, with an unprecedented amount of independent low budget Irish feature films being made. Terry McMahon’s “Charlie Casanova” being one of the first of a new protest genre. Not everyone will agree with what Mark is saying, but if it causes a reaction and gets people talking, hopefully it will have a positive effect for cinema in Ireland. Many thanks,

Irish Cinema: A Call To Arms

There is a new face in Irish cinema. The makeup is finally coming off.  The conventional and generic Irish films of the past are being replaced by what could be referred to as ‘The Irish New Wave’ or ‘Tonn Nua’. I believe that we are finally finding our voice.

The new wave has being rising for a few years now with pioneers like Ivan Kavanagh leading the way but not until recently has there been an emergence of a whole movement in Irish cinema. We have for too long focused on perfecting the script when in fact some of the finest work in this country, such as ‘Tin Can Man’ and ‘Pavee Lackeen’, came about through a uniquely personal way of working. These films show that the logic of film can work in a very different way than a rigidly plotted out story on paper.

This is not to dismiss the work of such early pioneers as Joe Comerford or Bob Quinn, or the two most respected film makers in this country, Jim Sheridan and Neil Jordan who have shown how the traditional approach can lead to works of real genius.

However there is a new movement in Irish cinema emerging which has an emotional truth and it is more exciting than anything that came before. Simon Perry could be seen as the grandfather of this new wave because of the amount of kids he produced. He was the first to encourage personal film making by supporting first time writer-directors that he believed in. Now that the fruit of Perry’s tree is beginning to ripen we are seeing an emergence of a new kind of cinema, driven by what I like to refer to as ‘Fís’ (vision) men such as Brendan Muldowney, Ian Power, Ciaran Foy, Colin Downey, Lance Daly, Ken Wardrop and ‘Fís’ women like Carmel Winters and Juanita Wilson.

Unlike the ‘Auteur’ or ‘Shreiber’ theories favouring either the director or the writer as the true author of a film, the ‘Fís’ Theory holds that a true singular voice can only be attained when the director is also the writer. If the director does not write it then they must rewrite it and reinterpret it into their own vision.

Whether you loved it or hated it, it is clear that Terry McMahon’s ‘Charlie Casanova’ is an astonishingly powerful cinematic voice and yet it was rejected by the critics. It seems sadly familiar to the years leading up to the French New Wave and Alexandre Astruc’s 1948 essay ‘The birth of a new Avant Garde: La camera-Stylo’ how the critics have once again over looked ground breaking films like Charlie Casanova. Is the point of art not to disrupt familiarity? It is not a perfect film by any means but it didn’t need to be. Its very conception was avant-garde and it’s a testament to its power how it has divided audiences, receiving international festival selections and IFTA nominations on the one hand and verbal assaults and one star reviews on the other. It seems ‘Charlie’ was a tough pill to swallow for certain audiences used to sucking on Hollywood infant formula.

As a direct result of ‘Charlie’ a new form of Irish cinema has begun.

The ‘Protest Film’ genre of which ‘Charlie Casanova’ (#1) and now ‘Stalker (#2) belong to, are direct reactions to what has happened in this country. They reflect the changes in the Irish psyche and the socio-economic and moral conditions of our time. The protest film is not conceived for the market. They are emotionally reactive, born out of necessity and a political and social consciousness.

With the development of high quality formats and crowd funding opportunities now accessible to all of us the tools are finally in our hands to go out and make films like ‘Charlie’ and ‘Stalker’ without having to wait for permission. While the funding bodies have been massively supportive to many of us and will remain so in the future, I believe there is also ‘ROOM FOR THE REJECTS’, the films considered culturally shameful, the films that go to the core and do not fit in with the standard, the ‘scannáin bagairt’ that are refused a voice.

These films ‘RAGE AGAINST THE SILENCE’ by expressing the inner most feelings about the society we live in. Their stance which is outside the system enhances the pure vision which is not answerable to a committee of opinions or restricted by time and money.

There are new techniques at play in our new wave, such as how music is being used, over lapping in editing and bringing actors more into the creative process, a technique being utilized by the very positive new Actor’s Studio in ‘The Factory’. The language of cinema is evolving and audiences are now capable of cognitively solving the mysteries of crossing the ‘180° axis’ or ‘jump cutting’ which has removed all remaining limitations in film making.

This article is written with the intention of bringing recognition to the wave. We need to build our indigenous film industry by making it about ourselves instead of trying to replicate the foreign model. For this movement to reach its full potential we need to promote Irish cinema as an important part of our culture and bring this new wave more into the mindset of Irish audiences. We need better models for the distribution of Irish film and we need our television stations to show more support for the industry. We should not be looking to work within a hierarchy but in a collaborative environment.

I would like to issue a call to arms that if there are any up and coming ‘Fís’ men or women reading this then you don’t need to wait for permission anymore. As Terry McMahon believes ‘The art is in the completion, begin’. Pick up a camera, create your spiritual treasure and reveal your feelings in all their unique beauty and our new wave will turn into a cinematic revolution.

It’s All About Pitching The Pitch 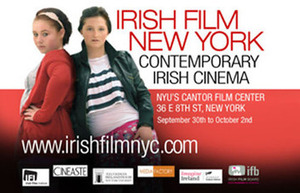 The Irish New Wave In NYC