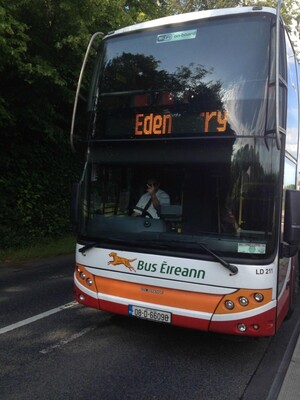 UPDATE: And by ‘bus hostage drama’ we do mean ‘a minor, fairly amusing first person account of a trifling incident on a bus’.

Myself and some friends caught the Dublin-Edenderry bus yesterday to our usual stop, two after Celbridge village. We have been taking this bus for two years paying the standard fare to Celbridge of €3.60 without incident.
Today however as we approached the door at the usual stop the driver stopped my friend and asked had he got a ticket. “I have, I paid you for it.”, my friend replied. He then refused to let us off the bus until we paid a further €1.70 for the journey from Celbridge village to the stop above (which happens to be next to a sign that says Celbridge on it).
This is a bit odd as it only costs €4.60 to go to Clane which is a good 10 minutes further down the road. So my two friends paid up and as I went to place the cash on the shelf part of the ticket machine the driver freaked out and grabbed my hand. I told him to let us off or we were calling the police and after shoving the new ticket in my face he opened the door. Long story short, he was a total a***hole. Here’s a photo of him jovially waving goodbye when he let us off the bus after a ten minute hostage situation!