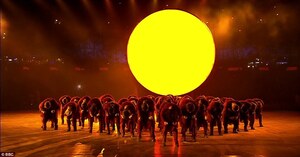 I didn’t think it was possible for NBC to disgrace itself more than it did by deciding not to show the tribute. But they did so in spades with this explanation. Can you imagine the BBC opting to cut out a tribute to 9-11 at a future Olympics held in the States because it wasn’t “tailored for a UK audience”? If that happened, suffice to say the switchboards at BBC Broadcasting House would have blown a fuse.
I’d already given some thought to not watching the Olympics after NBC’s epic fail. But this explanation clinches it.

NBC: We Skipped Terror Tribute Because It Wasn’t “Tailored For The U.S. Audience” (Daily Kos)”

Hey, At Least He Has A Job