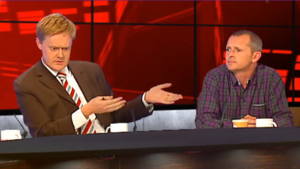 Yesterday the Irish Independent published a story by Fionnan Sheahan (above left) claiming the Government is considering a ‘super property tax’ for owners of large, expensive homes.

His article outlined how the coalition plan to link the tax to the value of the house.

Therefore, people with bigger houses will have a bigger property tax bill.

It turned into a greater discussion about tax in general. And those that don’t pay it in particular.

Vincent Browne: “It’s hard to see how you could fix the Budget deficit solely, without taking a property tax.”

Boyd Barrett: “In an answer from the Minister for Finance on the earnings of the top 10% of income earners in this country, it showed that last year they earned €29.5billion between them. 216,000 earners. But they only paid an effective tax rate of 24%. Double that, double that tax rate and you get…”

Boyd Barrett: “I’ve just said. If you increased it, if you doubled it from the current rate of 24% to 48%. Obviously, you’d, there’d be a gradation on it where it would get higher, the higher up you were, if you’re on half a million.”

Jim Power: “Doubling it to an effective 48% tax rate?”

Boyd Barrett: “On people earning in excess of €130,000 a year. Which is what that group earn on average.”

Power: “That is absolutely penal. I mean who in their right mind would remain in this country if they paid 48% effective tax rate.”

Power: “Well why would you bother staying in the country?”

Boyd Barrett: “I hate to bore people with facts here.”

Marie Louise O’Donnell: “Well you are.”

Boyd Barrett: “Well I’m sorry, these facts are important. When the Government say there’s no pot of gold at the top of our society, the top 10 earners in this country earned €6billion last year. That’s average earnings of €595,000  each per year. And they only paid an effective tax rate of 29%. Now let’s double, let’s bring it up to 50% on that group, that will raise almost €2billion. Why can’t we hit that group. They can afford it. They’d still be left with €280,000 a year. Is that…”

Boyd Barrett: “Do we honestly think that it’s moral that there are people earning €300,000 or €400,000 a year, while people are on minimum wage or average industrial wage are being slaughtered with austerity measures.”

Browne: “What do you think, Fionnan?”

Sheahen: “I think you’re friends on the left, Vincent, seem to be unique in this country.”

Browne: “I don’t have any friends on the left.”

Sheahen: “We’ll see what the tweet machine says about that. They seem to be unique…”

Browne: “I did have friends, whom I thought were on the left but I’ve discovered they’re not.”

Sheahen: “I’m told that right across Europe most people who regard themselves as left-wing or socialist and so on regard a property tax as a wealth tax. They regard it as a progressive tax. That tax is an asset, at the higher end, which wealthy people invest in. What Richard’s opposition to property tax is nothing new. We were scratching our head last December when he…”

Sheahen: “When you were opposing the household charge. And the whole point was ‘well this is unfair. The billionaires are paying the same as the poor man’. And you’re going, ‘OK, fair enough’. So, a property tax and the answer back was ‘aw no, we’re not in favour of any property tax’ whatsoever so I don’t get that. I don’t get.”

Sheahen: “I’m talking about the mansion on the hill in Dalkey, Dun Laoighaire, scatter them right across your constituency, there’s plenty of them there. Why aren’t you willing to tax those people?”

Boyd Barrett: “I am willing to tax those people.”

Sheahen: “But you’re not because you’re saying they shouldn’t pay a property tax.”

Sheahen: “Well your figures are very interesting because in March…”

Browne: “You mean you were talking rubbish earlier on, is that what you’re saying, Richard?”

Sheahen: “So back in May. On May 3, when you launched your Fiscal Treaty referendum campaign when you said, we estimated, prior to the Budget that we can..”

Boyd Barrett: “No an income tax.”

Boyd Barrett: “No I’m not. No that’s correct aswell.”

Boyd Barrett: “I’ll show you the figures from the minister for finance’s answers afterwards if you want to look at them.”

Sheahen: “So that’s 10 plus 2… that’s €22billion Richard has raised in the last five minutes.”

Barrett:“That’s rubbish what you just said.”

Barrett:“That’s the disingenuous rubbish that we’re getting from the Independent newspaper all the time.”

Sheahen:“I was quoting you. Yeah, go on, go on, Richard. Yeah. So those figures are they accurate now aswell.”

Barrett:“Just because the Independent newspapers has a vendetta against the Campaign Against the Household Charge.”

Sheahen:“Do you want to address your figures? Where did these figures come from?

Talk over each other.”

Browne:“Fionnan, go through the figures again.”

Browne: “The blather left is not interested in facts. Just as the blather recreational politics. And that’s what several of you people are about and that’s why I don’t have many friends on the left, I’m happy to say. ”

Later, at the very end. Browne read out of a story in the Irish Times about Labour’s Pat Rabbitte’s claiming the Technical Group is a group “theatre and fun, rather than solutions “. After reading it out,

Browne: “The Techical Group is there for “theatre and fun”. That’s fair enough, isn’t it Richard?”

Barrett:“The Technical Group is a technical group so it’s not a political group. So the issue is about the United Left Alliance.”

Browne: “Which is part of the Technical Group.”

Barrett:“The Technical Group is a technical arrangement for speaking time in the Dail. It’s not. There’s no policy unity between the techincal group despite attempts by certain sector of the media to create a political association that doesn’t exist.”

Browne: “Which is part of the Technical Group…”

Boyd Barrett: “The Technical Group is a technical arrangement for speaking time in the Dail. It’s not. There’s no policy unity between the techincal group despite attempts by certain sector of the media to create a political association that doesn’t exist.”

Sheahen: “You mean, like with Mick Wallace is it?”

Boyd Barrett: “Mick Wallace is not a member of the United Left Alliance.”

Boyd Barrett: “So yet again, yet again the Independent newspapers…”

Sheahen: “You sit alongside him, don’t ya?”

Boyd Barrett: “I don’t sit beside him.”

Boyd Barrett: “I don’t sit beside him, Fionnan..”

Sheahen: “Your buddies in the United Left Alliance.”

Boyd Barrett: “I don’t sit beside him. But you work for a tax refugee, who doesn’t pay his taxes in this country. That’s whose agenda you’re sharing.”

Boyd Barrett: “He’s just being disingenuous is what Fionnan is doing.”

Browne: “What’s the significance of sitting beside someone?”

Sheahen: “He was very slow to condemn Mick Wallace.”

Boyd Barrett: “I wasn’t slow at all.”

Power: “We were all waiting for the cock to crow three times.”

Read All About It

Throwing Us A Bone

“I Will Take My Revenge On As Many Of You Lot As I Can.”