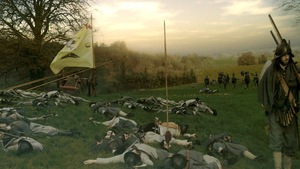 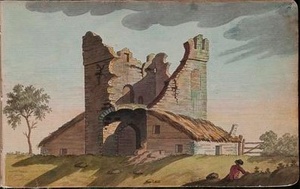 Above is Baggot Rath castle, destroyed in the Battle of Rathmines (1649 –  anniversary Today!) between Cromwellian forces led by Michael Jones and Royalist forces led by the Duke of Ormonde. At the time of the battle, Dublin, apart from Derry the last Parliamentary enclave in Ireland, was under siege by the Royalists.  On the 2nd August 1649 Ormonde was preparing to attack the city when, in a pre-emptive move ‘possibly aided by treachery’, Jones mounted a surprise attack on the Royalist forces at Baggotrath, driving them back to Rathmines.  The day ended in disaster for the Royalists who lost over 6500 men (4000 or so dead and over 2500 taken prisoner), their entire artillery train and supplies.
The Battle of Rathmines is regarded as having ‘completely change[d] the course of the war in Ireland’, not only securing Dublin for the Parliamentarians but also paving the way for the arrival of Cromwell, who on the 15th August 1649 landed in Ringsend with 15,000 veteran troops. A horse escaping from the battle is also allegedly responsible for the name of the Bleeding Horse pub.

Map of the battle here