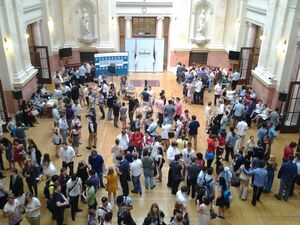 I thought you would be interested in knowing last night at the European University Debating Championships in Belgrade 7 Irish teams made it to the quarter finals. As things go that is pretty phenomenal; out of 16 teams in this morning’s quarter finals 7 of those teams were Irish! 3 teams from Trinity College, 3 teams from UCD and a team from UCC. This morning they debated the motion That This House Believes that the Serbian Republic should secede from Bosnia and Herzegovina and this the line-up for the semi final:
ULU B and Oxford A
Cambridge A and TCD Hist B
UCD L&H A and TCD Hist A
Cambridge C and BPP A
Two Trinity Teams and a UCD team through to the Semi Final of the competition which is currently taking place [started at 4pm Irish time] and can be viewed online here