Chris Andrews and the Syrian President in happier times. From a Fianna Fail election leaflet via TheSystemWorks blog

He had also used the fake account to criticise “dynasties” in Fianna Fail, even though he himself is a grandson of former minister Todd Andrews, a son of former TD Niall Andrews and a cousin of former junior minister Barry Andrews — all part of the Fianna Fail family. 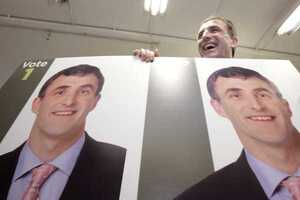