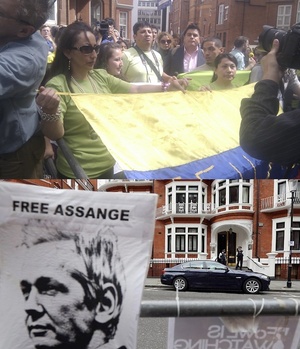 UK Police are definitely inside the ecuadorean embassy #wikileaks #assange

The UK governments threat to storm the Ecuadorian embassy to arrest Assange is an assult on the rights of asylum seekers world wide.

The government of Ecuador says British authorities have threatened to barge into Ecuadorean embassy in London if officials there do not comply with demands to hand over Wikileaks founder Julian Assange, who has been hiding out there while his request for asylum is considered.

“We are not a British colony,” said the country’s prime minister in a press conference today. “The days of the colony are over.”